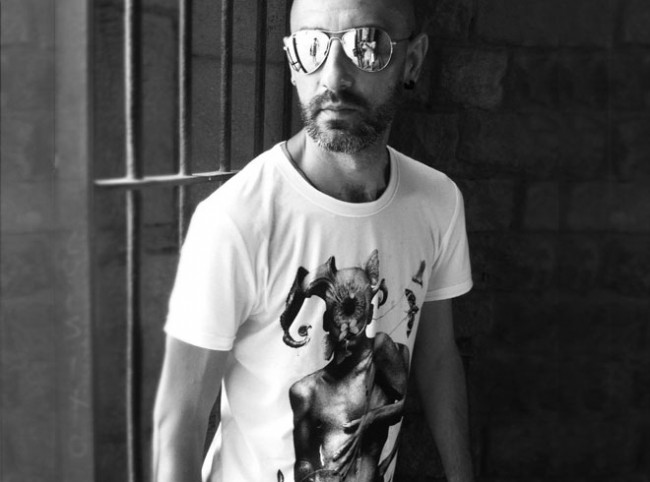 One of Vladymyr Podolyan‘s favorite things is Rubik’s Cube – childhood’s inheritance, as the designer himself likes to say. It seems like the world’s most addictive puzzle had indeed a deep impact on his way of thinking, as the collections he shows in his hometown Kiev twice a year have a similar concept.

Clear lines, simple silhouettes and thoughtful details in their quiet elegance bring a sense of ‘urban zen’, but once you come closer and interact with a piece, you will see it mysteriously changing. Something that looks like a simple dress at first glance can turn out to be an intricately cut blouse, or you might find a red zipper on a black skirt.

Podolyan draws his inspiration from a wide range of subjects, from global, such as social issues in the digital age, to personal traits such as loneliness.  Maybe it is exactly his unconventional philosophy and approach to fashion that prompt him to produce such amazing shows as the Fall/Winter 2012-13 show.

The show features stellar music and innovative special effects that project so much energy it seems like your computer screen would explode. It might be difficult to see the looks in detail which, in fact, is intentional, as it perfectly illustrates the designer’s idea that nothing is what it seems. «Are you always absolutely sure what you see is real? Illusions keep telling us what we are trying to see is not the world as it is but something entirely different» – says the designer. Earlier this year he was honored with an award for the best fashion show production at BEST FASHION AWARDS-2012 in Kiev.

But, as Podolyan also said once, the ultimate purpose of clothing is to cover our bodies, and the best “special effect” of that show, in my opinion, was the transformation of a mere illusion on the catwalk into a real and perfectly wearable outfit, created to celebrate the beauty and grace of the female body.

To learn more about the designer, visit podolyan.com