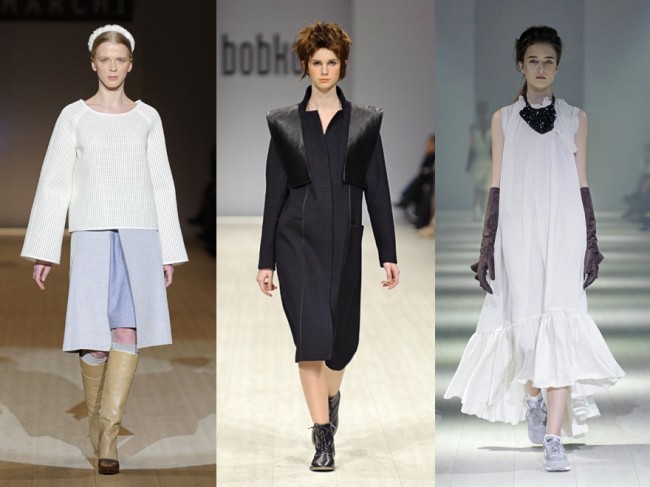 Ukrainians know and love their cultural heritage, and not a single fashion week goes without collections inspired by Ukrainian history, traditional costume or folklore. In this post it is two out of three.

There was a famous trade route in Ukraine in the 17th – 19th century, used to transport salt from the Black Sea. Marchi collection, called Solena (“salted”) was inspired by this part of Ukrainian history and the role of salt as an understated treasure in our lives.

Rigid fabrics like neoprene and linen in shades of gray and steel blue created the illusion of a salt crust, silhouettes were relaxed and unfussy. Despite the historical references, the collection is excitingly modern, combining three trends we saw on the catwalks earlier this year: stiffness, volume and trapeze skirts.

Christina Bobkova tapped into the popular masculine trend with a collection based on men’s folk costume. Indeed, the dresses felt almost as manly as looks with pants, and flat round toe boots pushed the idea further. As always, the designer used a tight palette, making just a tiny step from neutral colors in the direction of blue, green and orange, which created the impression of earthly tranquility and vigor.

Artem Klimchuk accidentally gets inspired by Ukrainian history as well (check out his interview), but this particular collection is about the times not so far in the past – the 90s.

Every time the young designer wants to do rebel and grunge it turns out as enchanting and sublime. Even sneakers, which are usually regarded as something opposite to feminine, mysteriously add to the image of free-spirited, romantic woman. Mr Klimchuk traditionally shows women’s and menswear together in one show, but I feel like the former would soon be overshadowed by the latter. Those baggy suits are simply amazing!