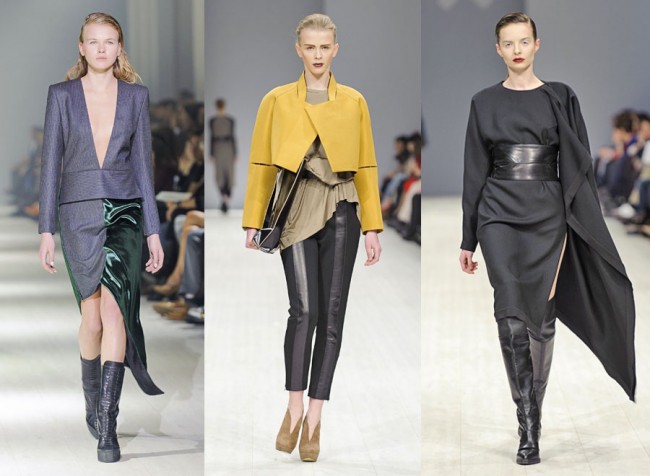 The 3rd day of UFW brought us collections inspired by the East, West and the combination of both. But however different their subjects might have been, there is one distinctive feature about these collections: they explore female sexuality and identity.

Isn’t it amazing that women look incredibly sexy in, say, a men’s suit or a boyfriend shirt? Lilia Litkovskaya drew her inspiration from two glorious personalities who could make a splash in either – Marlene Dietrich and Patti Smith. Loose coats with strong shoulders and wide pants acknowledged the ’40s-inspired elegance, while chunky boots and leopard print details provided a link to the beatnik era.

Kamenskayakononova, the young designer duo whose shows have become the week’s hottest ticket in the past few seasons, showed an intellectual collection rich with references and metaphors.

Inspired by their recent trip to Nepal and Tibet, Natalia and Olesya infused their designs with elements of traditional Far Eastern costume and, in accordance with the philosophical concept of Yin Yang, tried to marry such extremes as soft and hard, round and angular, paying close attention to texture and cut.

Extra bonus points for the handbags and shoes which were created as a capsule collection for Ukrainian footwear brand Braska.

While Litkovskaya’s woman is hiding behind voluminous coats and throws, Domanoff‘s female is fearless about her nature. Dark lips, cinched waist and the combination of stiff and flowing fabrics – such are the features of a self-confident and graceful modern woman’s style, according to the designer duo.