﻿﻿ The Russian Fashion Blog L’Officiel Russia Will Be Back 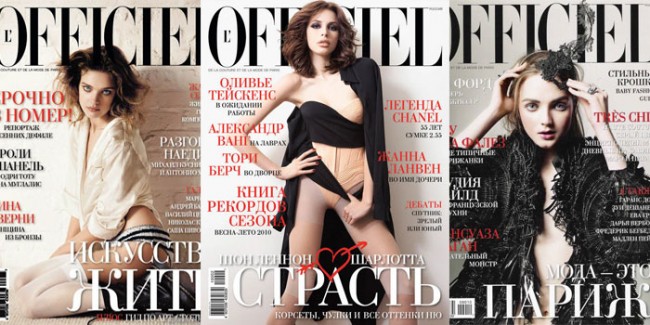 The much awaited re-launch of the magazine, which was once in the top 3 most popular glossies, is scheduled for this coming fall.

L’Officiel Russia had a glorious but challenging past. After a series of lawsuits following the epic dismissal of its famed EIC Evelina Khromtchenko (the vacant place was filled with the Russian publisher’s wife) the magazine has ceased publication in 2011.

Now Les Editions Jalou is taking charge. The lucrative Russian market prompted the French media group to invest almost $30 million in opening a branch in Russia that will be publishing all their titles: L’Officiel, L’Officiel Hommes, L’Officiel Art, Jalouse, etc.

In his comment regarding the re-launch of L’Officiel Russia Vladimir Pomukchinsky, the president of Jalou Russia, has mentioned “a charismatic editor-in-chief, well known to foreign fashion brands”. Could Ms Khromtchenko be back as well?