RUSSIAN FILM POSTERS: 1900-1930 By Maria-Christina Boerner Vivays Publishing, 192 pages, 196 illustrations In the early 20th century a staggering 60 percent of Russian population was illiterate. Yet they were exactly the crowd that went to the cinema as it was regarded as lowly kind of entertainment that the upper classes despised. No wonder both [Continue reading...]

A 100 years old color photographs of the Russian Empire 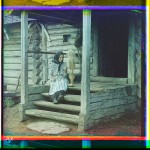 Ok, this is not exactly fashion, more like a great source for inspiration and research on historical ethnic dress. Anyway, very beautiful pictures of unbelievable for that time quality. Between 1909 and 1912 photographer Sergei Mikhailovich Prokudin-Gorskii undertook a photographic survey of the Russian Empire with the support of Tsar Nicholas II. [Continue reading...]

Written by therfblog on 18 November 2010

This exhibition, held in Triumph Gallery in Moscow, pays tribute to Russian fashion designer Slava Zaitsev.  The archives of late 80s – early 90s are being rethought and reinterpreted in a series of images and video installations, presented by Vconfession agency. An interview with the founders of Vconfession on Dazed Digital Camera – [Continue reading...]