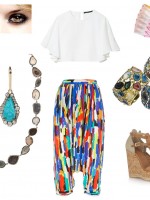 Extravagant materials constructed the costumes of the Ballets Russes. Rich tapestries, ornate embroideries, lavish jewels, and bright colors brought the stories to life on the stage, and aided in producing an avant-garde and revolutionary experience for the audience which gave the Ballets Russes its fame today. Otherworldly tales inspired the [Continue reading...] 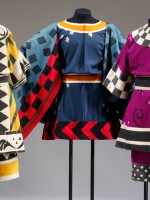 I positively cannot think of another piece of clothing or accessory that would feel more “Russian”. Kokoshniks were worn as early as in 10th-12th century and had quite a history since then. Together with other elements of traditional Russian costume they were banned by Peter the Great in order to modernize Russian social system, but [Continue reading...]

Russian Textiles: Printed Cloth for the Bazaars of Central Asia