Ukrainian designer Svetlana Bevza launched her eponymous label in 2006 and has since proved that the concept of minimalism is truly inexhaustible. Minimalism can be aristocratic, like in Bevza F/W 2011 collection, or “spiritual”, like the season before that (the collection was accordingly named “Path to yourself”), strong [Continue reading...]

Russian and Ukrainian Labels at Coterie Trade Show in NYC

Written by therfblog on 19 September 2011

Yesterday I had a pleasure of visiting Ctyl.’ Network (now Bridge Showroom) booth at Fashion Coterie, one of the largest and most prestigious trade shows on the planet, that takes place September 18 – 20 in NYC. Coterie is a giant treasure cove filled up to the brim with all the designer brands we know/love, [Continue reading...] 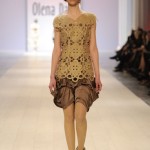 Nadya Dzyak A collection that’s not too heavy on philosophy = good for the consumer. I remember myself craving for something really warm that doesn’t look like a cocoon during long Russian winters. It might have been just one of these dresses, like that on the second picture – half leather, half felted wool. [Continue reading...] 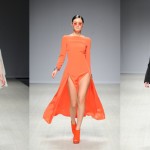 Russian Textiles: Printed Cloth for the Bazaars of Central Asia