Hollywood glamour, fifties and lingerie got intertwined in this beautiful collection by enigmatic label Bohemique. During barely two years of its existence the label has developed a signature “fetish” style that reveals itself in such elements as cinched waists, lace, exaggerated hips and lots of black. Praised by Moscow’s [Continue reading...]

Do they produce resort collections in Russia and Ukraine? Yes, they do! Here is one made by Ukrainian designer Kostya Omelya for his eponymous label. His inspiration was water as an element of nature, and indeed these designs seem to have the ability to transform any woman to a mermaid. OMELYA atelier is a young [Continue reading...]

An Ukrainian label with a hard-to-pronounce name used collage technique to present its F/W 2012 collection. Isn’t it just an awesome idea? If I were a buyer , this lookbook would be the one to keep. [Continue reading...]

Do you want to see a perfect debut collection? After years of styling for editorials in L’Officiel Ukraine, Grazia and In Style it seemed natural that sisters Alisa and Julia Ruban would expand into designing clothes. The first RUBAN collection was born as part of an ongoing quest for redefining casual and refreshing Moscow girl’s [Continue reading...] 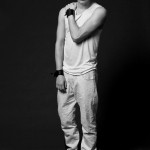