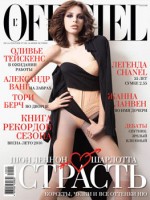 The much awaited re-launch of the magazine, which was once in the top 3 most popular glossies, is scheduled for this coming fall. L’Officiel Russia had a glorious but challenging past. After a series of lawsuits following the epic dismissal of its famed EIC Evelina Khromtchenko (the vacant place was filled with the Russian publisher’s [Continue reading...]

International magazine Numéro launches a Russian edition as part of a license partnership between Groupe Alain Ayache and ARTCOM Media Group, one of the Russia’s leading media companies that runs a number of online and offline publications. Numéro Russia will become a 5th edition of the magazine worldwide, following successful launches of [Continue reading...]