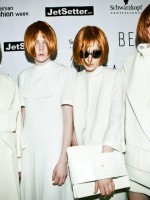 Shows of the second day of Ukrainian Fashion Week: Podolyan, Kamenskayakononova, Anna Bublik Podolyan When there will be no you and me, no living beings left on this planet at all, what will remain? Stardust (or ‘Dust’ for short) is the theme of the latest Podolyan collection. While the idea behind it might seem quite [Continue reading...]

One of Vladymyr Podolyan‘s favorite things is Rubik’s Cube – childhood’s inheritance, as the designer himself likes to say. It seems like the world’s most addictive puzzle had indeed a deep impact on his way of thinking, as the collections he shows in his hometown Kiev twice a year have a similar concept. Clear lines, [Continue reading...]