﻿﻿ The Russian Fashion Blog No More Cycles and Seasons

‘Cycles and Seasons’ is a term that non-Russian fashion press have only recently become aware of, and in light of the latest news about the project’s termination, it becomes evident how little is known about Russian fashion in the rest of the world.

Cycles and Seasons by Mastercard was launched in April 2009 as “an edgier alternative to Moscow Fashion Week” (AnOthermag.com) by Anna Dyulgerova, a former Executive Fashion Director at Vogue Russia and managing director at Denis Simachev, and fashion stylist Andrey Artemov. Held between the Mercedes-Benz and Volvo fashion weeks, C&S by Mastercard was an ‘alternative’ showcase of emerging design talents on a much smaller scale. Initially starting with five designers exhibiting their work in the course of three days, the event expanded to represent a highly curated selection of talents including, among others, Nina Donis, Vika Gazinskaya, Gosha Rubchinsky and Vardoui Nazarian.

Unlike traditional fashion weeks, C&S prided itself on being a collaborative space for industry professionals and multidimensional artistic projects, and as such has become known for its selection of not only fashion shows, but also exhibitions, lectures, master classes and screenings. It has seen the likes of Juergen Teller, David Lynch, Victor&Rolf, Derek Blasberg and a number of prominent fashion bloggers among its special guests.

Like any other recently started venture, Cycles and Seasons Festival was not devoid of its own pitfalls, mishaps and mistakes despite the ambitious and honourable intentions of its organisers. Even with a growing understanding of principles behind the Western way of production, the vast majority of Russian designers still struggle to produce seasonal collections on time, which results in delays and rushed organisation of curated event programmes, all in line with a traditional sense of chaotic Russian spirit. 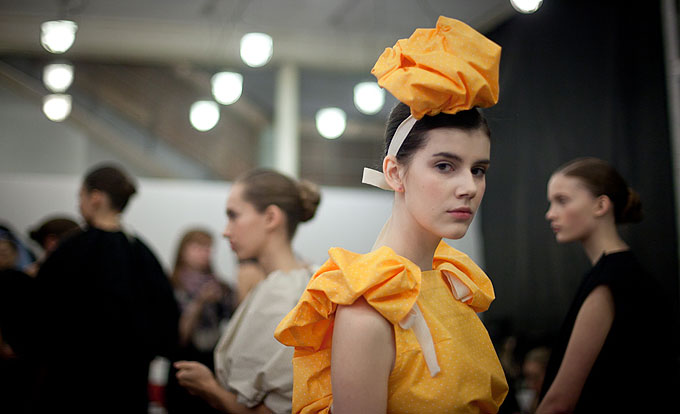 Another problem, as Anna Dyulgerova repeatedly observed, is the mentality of fast fashion and a desire for immediate results, which undermine the very importance of an established production team and the gradual technical and creative evolution of a brand. Eager to impress the foreign industry professionals and authoritative publications, designers often concentrate on lavish settings of fleeting fashion shows with no regard for long-term financial and production brand strategies, which in turns leads them back to the obscurity that they seek to escape from.

After the most recent Cycles and Seasons Festival, it has also become evident that there is, in fact, no clear line between the more traditional Mercedes-Benz Fashion week and what was deemed to be the “underbelly of Russian fashion”, in the words of Dazed Digital contributor Susie Bubble. Seeing Lena Vasilyeva showcasing her classically structured designs did not exactly come across as an alternative and rebellious talent struggling to be heard and seen, something that Cycles and Seasons organisers repeatedly put forward as an idea behind the festival. This tendency to revert back to the somewhat more conservative ways of Russian fashion shows clearly indicated that C&S was still in its infancy, trying to navigate in a disorganised and unstable world of Russian fashion.

The news of C&S project termination came certainly as a surprise, given the unrealised potential of a young and rapidly expanding structure of the festival. Despite the Mastercard’s assurance that the main goals of the project were in fact achieved, the feeling of a misused and abruptly ended opportunity still lingers. With that in mind, however, it is important to acknowledge that the introduction of Cycles and Seasons by Mastercard has brought an eagerly awaited and long-overdue change to the industry that boasts a vast pool of talent and requires just a little push and structure to put Russia back on the map of influential, fashion-minded countries.