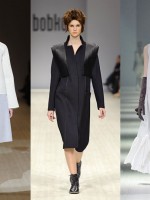 Written by therfblog on 13 December 2012

Christina Bobkova’s new collection for the spring-summer 2013 season proved to be one of the highlights of the Ukrainian Fashion Week that took place back in October this year. Known for her strong aesthetic that emphasizes the idea of a modern, confident and adventurous woman, the designer did not disappoint, showing a collection of [Continue reading...]