Written by therfblog on 11 September 2012

‘Cycles and Seasons’ is a term that non-Russian fashion press have only recently become aware of, and in light of the latest news about the project’s termination, it becomes evident how little is known about Russian fashion in the rest of the world. Cycles and Seasons by Mastercard was launched in April 2009 as “an [Continue reading...]

As we are now in the middle of the Russian-Ukrainian fashion month, I would like to post an overview of what is happening right now in both countries. In the picture: a design from TOSHA S/S 2012 collection Saint Petersburg, Russia Defile Na Neve fashion week has just ended and, in my humble opinion, it [Continue reading...] 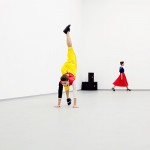 Written by therfblog on 13 December 2010

Did you know that in Russia they celebrate Christmas after New Year’s Day, not before? That’s why most holiday collections by Russian designers are called “New Year” collections. So, please welcome: a New Year collection, created exclusively for Click boutique in Moscow by several designers, including Nina Donis, I am, Maya [Continue reading...]