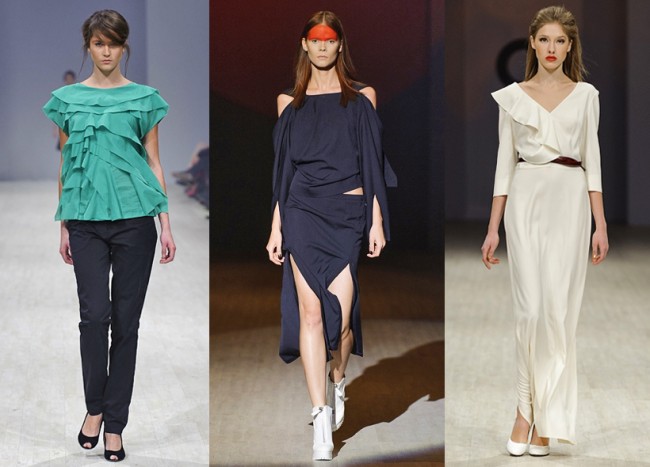 When there will be no you and me, no living beings left on this planet at all, what will remain? Stardust (or ‘Dust’ for short) is the theme of the latest Podolyan collection. While the idea behind it might seem quite sad, the collection itself is bright and cheerful. Life is short, so take it easy!

Podolyan is not a color-blocking and print-mixing kind of designer. Whatever color he adds to his usual neutral palette becomes a statement, like the striking green below. Some of the outfits were covered with dust, which presented a nice contrast with clinical white.

Three colors reigned at Kamenskayakononova show yesterday: black, white and red. Such a narrow palette isn’t unusual for the designer duo if you look at their past collections here. What changed in the last year is that their vision became edgier and its presentation – more fearless, so no wonder they won an award as the best designers of 2012. Extra bonus points for the great casting that included the star in the making Irina Kravchenko (above).

I’m not sure what this collection by Anna Bublik is inspired by, but there is something undeniably Italian about it. Feminine ruffles, sexy red and bold metallic gold, sunglasses, skinny belts and updos – all this evokes a sense of dolce vita.